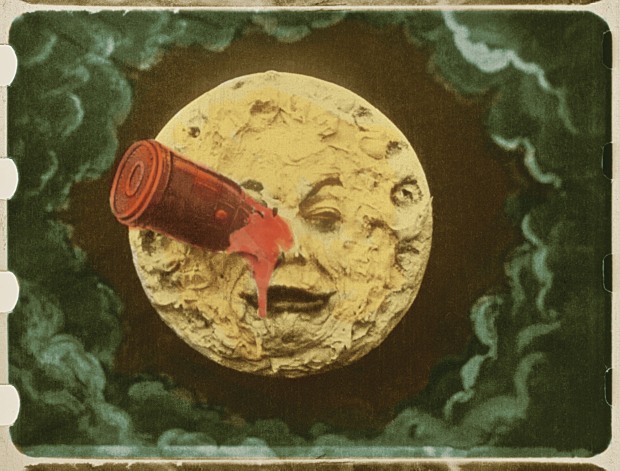 With the first days of Le Giornate done, Tuesday rolled in with a large selection of major screenings to see. First up was a double helping of early Westerns (in connection with the new Treasures 5 DVD set which had just been realised); both of which, Deshutes Driftwood (1916) and The Lady of the Dugout (1918) were most certainly worth watching. Driftwood in particular, a film which (as the notes stated) was filmed as a ‘scenic’ picture film from a hobo’s point of view while hitching across central Oregon. Not only was this 11 minute short wonderful to watch (all credit to Stephen Horne who’s live score was superb) the film also made certain members of the audience scratch their heads. Mainly because the film looked far more modern than it’s 1916 date. Many stating that it looked far more like a film made in the 1920s at least. What ever the date, Deschutes Driftwood was most certainly a film worth noting for later screenings.

From there, we moved from the American Western to some good old Soviet propaganda, and boy Oblomok Imperii (1929; Fragments of an Empire) most certainly gave us the impression on how good those Russians had it in the 1920s (or did they?). Anyway, the story was mainly set around the story of a Russian solider Rip Van Winkle, a non-commissioned officer of the Russian army who, having lost his memory on a Great War battlefield suddenly recovers ten years later, in which, by that time, the Bolshevik Revolution of 1917 had come and gone and changed the way in which Russia looked and worked. The film then follows Winkle as he comes to terms with the major changes made when he returns home. At points an incredibly warm film and at other times, incredibly barking, literally. In an early scene at the beginning of the film, we see a Russian soldier suckle milk from a dog. Not really what you want to see before you have lunch really, however, that did wake everybody up.

After that hearty viewing and a hearty lunch to go with it we were then introduced to the work of Edwin Thanhouser and the films made by his film company. Some short gems included Uncle’s Namesakes (1913) and Their One Love (1915) which (in my opinion) were far better than the David Copperfield (1911) feature which was screened soon after a selection of shorts. Anyway, apart from that, it’s most certainly worth keeping an eye on the work of Thanhouser. It’s worth noting as well that there is a a very good website on his work at: http://www.thanhouser.org/index.html The website includes a vast selection of Thanhouser’s work and includes some of the films mentioned above.

And after all this, there was another major highlight from the day and that was Lobster Film’s colour restoration of Georges Méliès classic Le Voyage Dans La Lune (1902; The Voyage to the Moon). Classed as the most expensive film restoration ever (costing around 400,000 Euros) and a project which had been on and off for over 10 years, it was most certainly worth waiting for and the films screening with an intro by the Lobster boys were warmly received. However, the new specially commissioned score (written and played by French band AIR) wasn’t received as well. As the lights came up after the screening, yells of ‘Disgrace’ and ‘Shameful’ could be heard as well as the odd boo. In my opinion, while the score made the viewer look at the film from a different perspective it did hinder the enjoyment of the screening and even the huge amount of fantastic of time, money and effort in which Lobster (and their many supporters) had done on it. At points, when watching the film, I began to feel that the music was too over powering, my attention began to turn to listening to the music, instead of the film itself. In which, in my mind, is the worst thing a music score can do. Any how, apart from the score, I would strongly suggest going to see this new restored print of Le Voyage Dans La Lune. And keep an eye out for a large hanging key in which you might see in one particular scene on the right hand side of the screen, this was something Serge Bromberg pointed out his great lecture about the restoration. It could well be one of the earliest bloopers in film history. The hanging key could well be the key to the Melies studios, and was accidentally included in the set for one shot.

Moving on from rockets and moons, the Giornate continued Tuesday night with a very interesting Russian film called Shinel (1926; The Overcoat), probably not the most thrilling of titles I know, and possibly not the most thrilling first 20 minutes of a film. But, the later part of the film tells the story of a elderly desk clerk, who (in his mind anyway), thinks that if he has a very expensive (and a very large) overcoat he will be well suited with the rest of his colleagues at work. Sounds mad I know, but if you ignore the rather crazy and simple storyline, the main achievement of the film is not only the great direction of the camera work and cinematography but also the fantastic acting ability of Andrei Kostrichkin, who, at times, reminded me of Max Shreck’s performance as Count Orlak in Nosferatu, eine Symphonie des Grauens (1922; Nosferatu: A Symphony of Horror). An incredible performance which really stuck in my mind throughout the rest of the festival.

After being on such high after the screening of The Overcoat, I gave a few minutes to another early Curtiz film, this late screening being Az Utolso Hajnal (1917; The Last Dawn). However, like many of the past Curtiz films, I really had trouble keeping an interest in the film (and even staying awake), so after 30 minutes I shifted myself out of the cinema and into the shadows of the night.

Wednesday kicked off with a rather entertaining German comedy called Das Spreewaldmadel (1928) in which the storyline centres around the love triangle between a German army officer, a village girl and the village girl’s betrothed local boy (the local boy being a rather overweight lard ass). The film throughout is pretty fun, with some nice set pieces, including sequences with the officer’s uncle and his own fiancée with the film concluding with a very good (but possibly over cooked) chase sequence. A good start to the day.

Thursday continued with another selection of Corrick Collection shorts, and a screening of Hintertreppe (1921) and SVD Soyuz Veligovo Dela (1927; The Club of the Great Deed) both of which were really worth keeping an eye out for. And while SVD does have a rather unstable storyline, the final sequences which are set in and around a massive cathedral located on a barren Russian landscape reminded me of another rather interesting Russian film Andrei Zvyagintsev’s great 2007 film Izgnanie (The Banishment).

Up next was the special screening of Chaplin’s The Circus with a live score performed by the Orchestra San Marco Pordenone (conducted by our good friend, the fantastic Günter A. Buchwald). And at this moment I must put my hands up and state, that I wasn’t able to see it. To cut a long story short, I basically messed up my tickets and sadly wasn’t able to get back in for this screening. It was sold out after all and the queue for the event went straight across the main square opposite the Verdi cinema and continued right up to the main road. I was however, allowed to stand outside in the main waiting area and watch the recently found 1 minute fragment of The Divine Woman starring Greta Garbo and Hans Larson (directed by Victor Sjöström) on a large TV. The fragment showed Garbo stepping outside and walking to Larson and kissing him, then we cut to black. End of fragment. I then left, sadly, leaving The Circus behind (in which I heard the score was fantastic) and leaving the chaos of people trying to get seats somewhere in the Verdi (the theatre had over sold about 60 tickets I later heard).

Thursday morning started out brightly with a very dark film by Victor Sjöström (yes him again) called Kilostret I Sendomir (1920; The Secret of the Monastery). Like I said, an incredibly dark film which tells the story of how one man seeks out whether or not his wife was having an affair and takes his revenge out on her, the lover and their child. Most certainly worth watching. Next up was The Great White Silence, with a selection of relevant shorts about Scott’s final trip. Thankfully the score for The Great White Silence was far superior to the mess which we’ve recently had with the release of the film on BFI DVD and BLU-RAY and it was most certainly worth watching this great restored film on the big screen.

However, the biggest surprise of that Thursday came with the late evening screening of William Beaudine’s The Canadian (1926). Basically the same storyline as The Wind (1928), The Canadian most certainly charmed many members of the audience, especially when it came to the wonderful performances by some of the key players (Thomas Meighan, Dale Fuller and Mona Palma). All were superb throughout, especially in a classic little sequence found right at the beginning of the film when there are a number of glances around a lunch table. The glances (in reaction to Mona Palma’s main characters rather embracing exploits) which are made between certain characters sitting around the table are comically timed, a perfect set-up for the rest of the film. It reminded many (including myself) of the classic dinner table sequence from the Max Davidson classic, Pass the Gravy (1928). However, the film does take a darker turn later on, and then suddenly jump back into a lighter mood. An incredibly sweet film, and most certainly worth staying up to watch and (I think) one of the key films of this years Giornate.

In the final part of my highlights from the 30th Le Giornate Del Cinema Muto, I will talk about a few more Michael Curtiz early films (dare I), a few more American Westerns, a Hitchcock film which isn’t a Hitchcock film, Ernest Shackleton and Carl Davis and the Wind.

This entry was posted on October 17, 2011, 9:57 am and is filed under Uncategorized. You can follow any responses to this entry through RSS 2.0. You can leave a response, or trackback from your own site.