The final lineup for our annual fundraiser has now been formulated and it features a couple more start names on top of those already announced. Also, despite the fact that we keep on telling you that the event sold out some time ago (which to all intents & purposes it had) the good news for any of you who failed to snaffle tickets when they first went on release is that we’ve found another handful which went on sale yesterday.

You can grab these tickets either by heading over to Colston Hall yourself or by phoning their box office (sadly a booking online option is not available for these tickets). Obviously considering the first 1400 tickets sold out in the first week the best advice would be to get on the blower asap if you don’t want to miss out on what promises to be the comedy bonanza of the year!

Now, for those of you who are definitely attending “stand up (again) for slapstick” we have news of the final lineup. Joining the already announced comedy giants that are Rob Brydon, Lee Mack, Henning Wehn, Shappi Khorsandi and Boothby Graffoe will be two other artists you will all no doubt be familiar with.

First off we’re being joined by long time festival friend & Monty Python song-smith Neil Innes. Neil is also of course famous as being a member of both the Bonzo Dog Doo-Dah Band and the Rutles and is generally thought of as “the seventh Python”. More recently of course Neil’s been a member of The Idiot Bastard Band, a comedy musical collective featuring himself, Adrian Edmondson, Phill Jupitus, Simon Brint and Rowland Rivron. 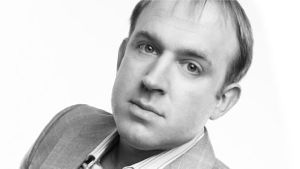 Also joining us for the festival as the sixth stand up artist will be a past (and, indeed, current) master of the art. He’s also of course well-known as Lee Mack’s Not Going Out co-star & is, of course, Tim Vine. Perhaps Tim’s most notable claim to fame is that for a while he held the world record for the most jokes told in an hour, a phenomenal 499! He also won the award for best joke at the Edinburgh Fringe Festival in 2010 and came second in 2011 and 2012. Finally, proving how multi are his talents, he was a finalist in the 2013 series of “Let’s Dance” for Comic Relief.

The night promises to be one of the best in the history of the Slapstick Festival so here’ hoping as many of you as possible will be down to enjoy it with us.

This entry was posted on May 2, 2013, 3:34 pm and is filed under Uncategorized. You can follow any responses to this entry through RSS 2.0. You can leave a response, or trackback from your own site.